The first-ever Philadelphia City Quizbowl championships took place on Saturday, March 12th at Friends Select School in Center City and finished with Friends Select School (FSS) A going undefeated to take the championship over FSS B, which finished as the runner-up. Carver HSES A grabbed the third-place trophy (and top public school bragging rights) and Central High School B the fourth-place trophy. The field consisted of 12 teams from five different schools from across Philadelphia. Full stats are available here. 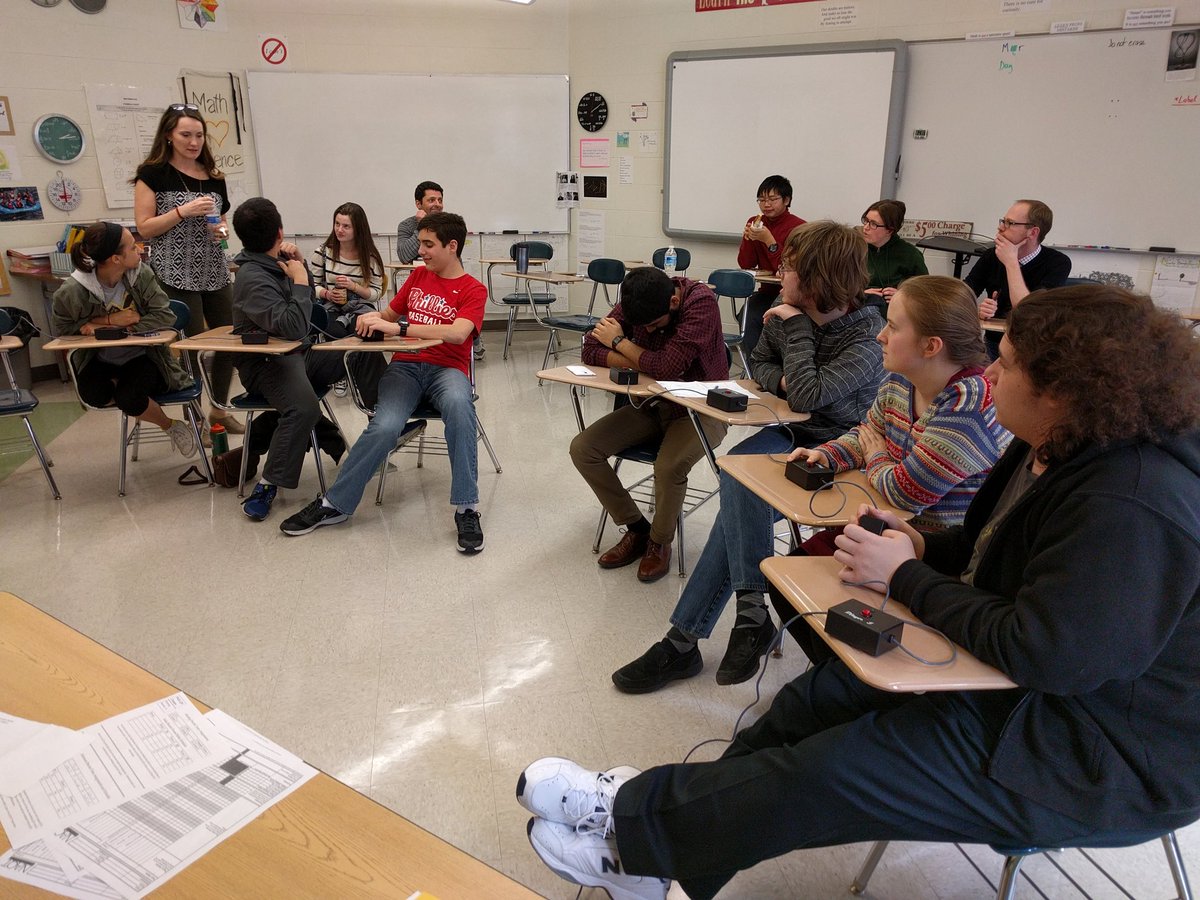 FSS B (left) and FSS A (right) just before the final match with their coaches Abbi Smith (standing on the left) and Ian Lockey (sitting, back row at right). FSS A won decisively to clinch the championship.

This was a great day for all of the teams and players at the tournament, but with a nearly 400-point average margin of victory FSS A clearly showed that they are the class of the city this year. FSS A’s all-senior team will represent Philadelphia at Harrisburg at the Pennsylvania State Academic Competition in April and will make Philadelphia’s national championship debut at the HSNCT in Dallas in May. Going from having never picked up a buzzer to one of the top teams in the state in less than 6 months is quite an accomplishment and a testament to both FSS A’s raw firepower (check out their power rate!) and quick study ability.

FSS B turned in a strong performance to finish as the runner-ups with a short-handed team. Both of FSS B’s “twin towers”–Jake and Richard–are underclassmen and bring history and geography heft as well as unusually strong music knowledge to the table. The key match in the race for 2nd place was FSS B’s extremely close 275-265 win over Carver HSES A in which FSS B’s strong bonus conversion won out. That victory put FSS B in the driver’s seat and an undefeated record until they faced FSS A.

Carver HSES A posing with their third-place trophy.

Carver HSES A bagged yet another trophy (their 3rd of the year) with a 3rd-place finish. They’re anchored by a triple threat from William, Su, and Dalya who all defend their categories well and play balanced, disciplined quizbowl. Dalya in particular has stepped up and improved throughout the year, and both she and Collins–their seniors–will be missed. Fortunately, Carver has a good supporting cast to build on for next year, especially from their improving B team.

The four Central HS teams once again turned in strong performances. In what has become a surprising tradition at every tournament so far this year, Central B finished ahead of Central A and in 4th place overall by winning their head-to-head match. Central C and D also had better-than-expected performances and all four teams demonstrated impressive depth for a school that just started playing quizbowl in October. Although we have not seen it yet, it would be quite interesting to see a Central team with its top 4 players–probably some combination of Gabe, Owen, Ella, Wylie, Danny, and Anna– all at once (there’s still time and tournaments if they want to make it happen!). Most of Central’s teams are senior-heavy, so they’ll have a bit of rebuilding to do next year.

In the consolation bracket, FSS C ran the table against the opposition to win the bracket (the stats don’t clearly show it, but they were 5-0 in the bracket) over Central C, Carver B, and the teams from Franklin Towne Charter and Science Leadership Academy (SLA). Franklin Towne and SLA are both very young teams of almost entirely freshmen and sophomores who are just starting out with both quizbowl and high school as well. This should be a great learning experience for them and I was pleased to see that every team left with a win.

A number of new players in the Consolation bracket made some impressive quizbowl debuts as well. FSS C’s Jasper was originally going to scorekeep, but decided to play instead at the last minute and put up an excellent 63 PPG. Central C’s Anna also did well with 6 powers and 28.75 ppg despite a strong shadow effect from Owen; SLA lost their lead-scorer from QFO but added the 21 PPG of Jack; and Christian from Franklin Towne A averaged over 20 PPG in his quizbowl debut.

One of the most impressive things that I saw yesterday is just how much teams and players have improved from even a few months ago. Carver A for instance went from 11.3 Points-Per-Bonus in December to 15.3 yesterday and Friends Select A’s PPB  similarly increased from 21.48 to 24.15. Those increases came in just 3 months of studying! Any team can get good at this game and it’s great to see that teams have been taking advantage of quizbowl’s copious free study resources to improve so quickly.

As an added bonus, an ABC 6 TV camera crew stop by for what turned out to be the de-facto 3rd place match between Carver A and Central B. Check out some fuzzy videographic evidence here.

All in all, this tournament marked a huge step forward for quizbowl–and intellectual curiosity and friendly academic competition in general–in Philadelphia. The coaches are awesome for taking time out of their extremely busy lives to come and support their teams along with a good number of  proud parents. Major thanks to the superb moderator group that we had: Bill Tressler, Bern McCauley, Ben Herman, Eric Mukherjee, and Ian Lockey plus several guest-mods from FSS. And a particularly huge thanks to Abbi Smith at Friends Select who poured tons of time and effort into helping to organize this event.

I am very, very excited about the direction of quizbowl in Philadelphia. I look forward to seeing all these players next year at both high school and college tournaments along with a whole new crop of players, teams, and schools from every neighborhood in Philly!