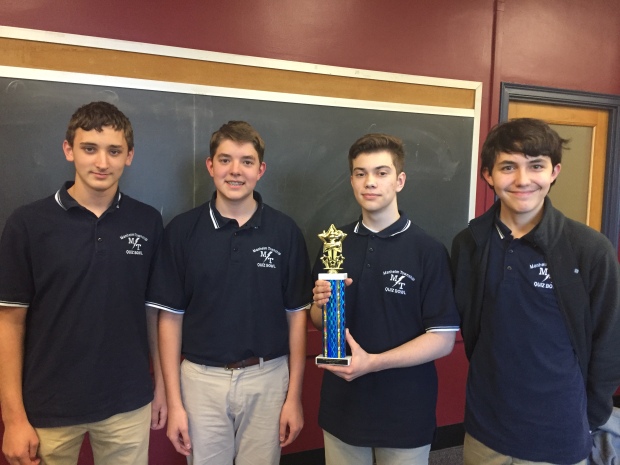 Manheim Township A poses with their 1st place trophy

15 teams, 11 of them from Pennsylvania, were on hand this Saturday for the second annual Nittany Lion Novice Tournament at Penn State University. It was a mirror of the PA Novice Set, written by GPQB writers and other quizbowlers from the state. The event offered an opportunity for many new or younger players to shine.

Manheim Township A’s younger players successfully defended the school’s NLN title with an undefeated, 8-0 performance. No one player dominated their roster, and they pulled off a close final over runners up Kellenberg (NY) A, who looked equally sharp. State College A won 3rd place with a balanced attack, overcoming solo team Indiana A for 4th. This suggests the states’ perennial powers have a very deep bench and will continue to remain contenders at regular difficulty tournaments for quite some time.

The tournament also had Cornell (NY), Huntingdon, and first time pyramidal entrant Milton Hershey aboard. Though they did not make the playoffs, it was nice to see kids from these schools having a blast and making some very good buzzes. Particular kudos go out to Milton Hershey, for facing the field as a first time school with aplomb, and, after adjusting to the format, putting up a very competitive afternoon. Well done to all entrants!