Eleven teams were on hand this past saturday to kick of the Pennsylvania quizbowl season at Penn State University. The third annual Nittany Lion Novice, an event designed for underclassmen and new-to-quizbowl players, featured a crop of young quizbowlers from four schools ready for action. 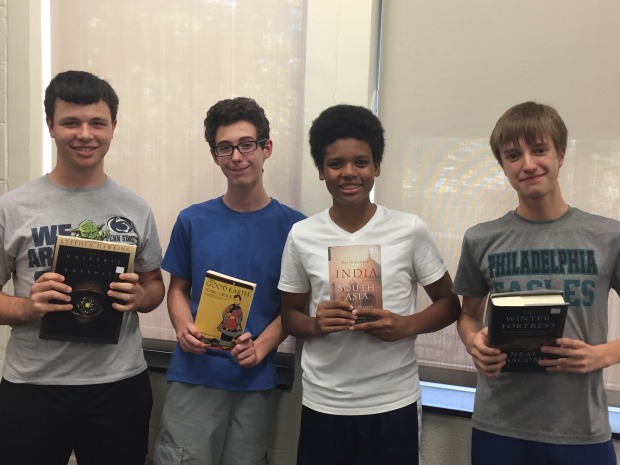 State College A with their book prizes for winning first place at NLN.

The tournament used the DEFT set, which, although advertised as a regular minus set appropriate for a novice field, turned out to be yet another overly difficult housewrite that resulted in many low scores and pitchers duels which were no fault of the players themselves. The fact that so many overcame the difficult set to have big performances makes them all the more impressive.

State College A won the event, going 9-1 during the round robin and beating their own C team in an advantaged final. They looked strong all day, using enthusiasm as a weapon and willing their way to wins despite the occasional mistake. Chris K.’s literature knowledge proved especially useful on the day, as literature can be a hard skill to find in starter quizbowlers. Third place went to Manheim Township A, who lost a half packet tiebreaker of 8-2 teams for the right to join the final. Camp Hill and Huntingdon each sent a team, as well as Manheim Township’s middle school. State College, still flashing their signature depth, managed to field six teams (without any upperclassmen!). I was amazed by the parity of the field, as no team had an average margin of victory or loss greater than 175 points and many students really got to show their stuff. Andrew from Huntingdon was the tournament’s highest scorer for players that were there the whole day, with 63 points per game and a strong 13/50/13 line. Also worth mentioning was Manheim Township Middle’s AZ, who scored 49 points a game despite being one of the tournament’s youngest players.

I saw a lot of raw talent on the field Saturday, and I am excited to see many of these young quizbowlers continue to learn and score as their careers take off.

Manheim Township A during the morning phase of the round-robin.