In this podcast, Ben and Jackie are joined by Penn State’s Ashish Kumbhardare to discuss the midseason poll. Who impressed? Which of the 16 ranked teams has the best chance to keep improving?

Tune in here to listen!

It’s that time of year again- as we flip calendars, we also flip from the first half of the qb season to the stretch run. Lineups have mostly been set, and top teams are gearing up for a run at the state title and, for a few lucky programs in America, the chance to maybe even claim a national title. As is always the case here, we have convened the voters panel and produced our own mid-season poll of teams in Pennsylvania. 17 moderators and alumni of the circuit cast a ballot this time. Here are the results:

We wish all these teams and the rest of the PA crew the best of luck with 2019 and the back half of their seasons!

48 teams were on hand to celebrate the holiday season with some high octane quizbowl at Manheim Township this Saturday. This is always one of the biggest tournaments of the season, and also one of the most fun to play and staff. As always, MT did an exemplary job on logistics, with the event being wrapped up, including finals, before 3:30. 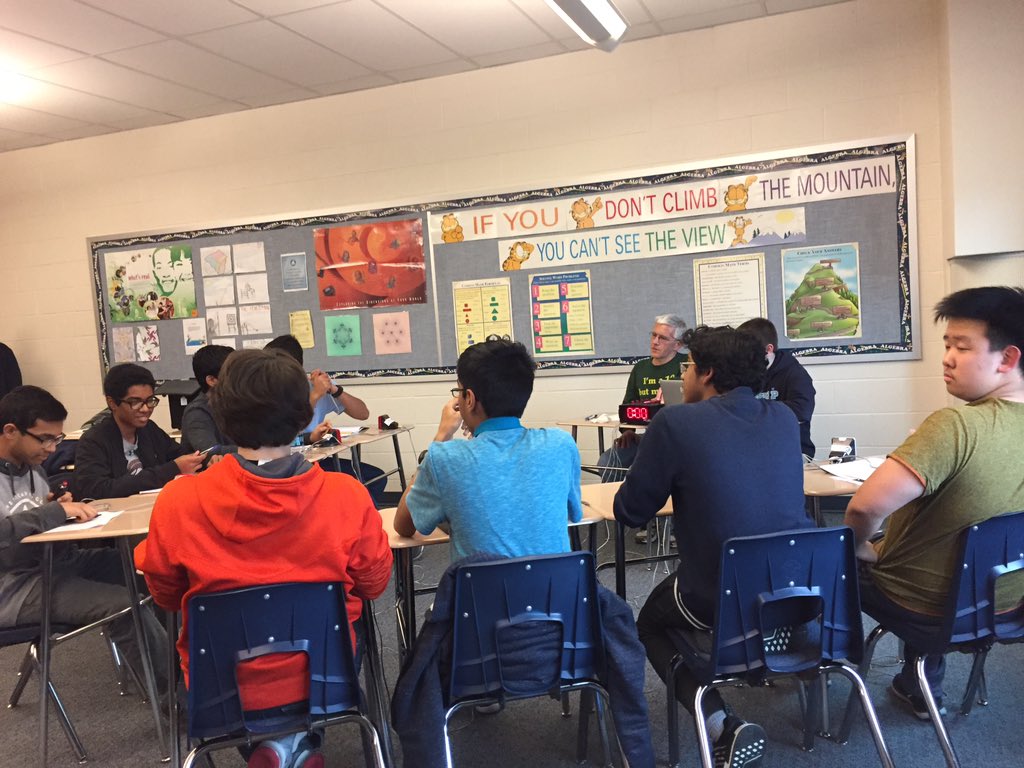 The tournament final, between Henderson (further from camera) and Great Valley.

Great Valley A won the varsity division by going undefeated on the day, punctuated with a 420-310 final win over second-place Henderson A. GV put in a balanced performance on the day, with multiple buzzes per game from all four players, and they managed to keep their neg totals to a minimum in their high-pressure games. Henderson’s only loss came in the final, and they were impressive in the prelim games I read for them. Vijay Anne continued to lead the scoring for this team, but Sid Chenrayan had a major breakout day as well. The question remaining for Henderson is how well they will scale up to higher difficulties, but this was a strong day for them.

Penn Manor A took third place in a thrilling 355-350 match over Kellenberg A (New York). Connor Mayers took home the top scoring accolades in prelims by a wide margin, with 127.14 points per game, as well as a 1:1 powers to gets ratio. Penn Manor’s only loss of the tournament was a 340-330 defeat to Great Valley A, showing that the top teams in eastern Pennsylvania remain neck and neck.

Rounding out the top bracket were Friends Select A, Great Valley B, Hempfield A, and Unionville. Friends Select has done a nice job of retooling after last year’s graduations, with Matt DAnnunzio really emerging as one of the breakout players of the season. Their PPB hovered near 24, a solid mark for this level. Like their A team, Great Valley B got good contributions from all four players, and they beat FSS A by a healthy 420-230 margin in the playoffs. GV certainly remains one of Pennsylvania’s deepest programs. Hempfield A led the field in PPB in the prelims, notching an impressive 25.23 mark. Will Yaeger remains in the conversation as one of the best players in the state, and Ryan Zhang and Carsten Brodbeck turned in good performances as well. Their back-and-forth with local rivals Penn Manor played out once again, with PM emerging victorious by a 405-255 scoreline. Lastly, Unionville returned to the circuit and went 6-1 in prelims to make it into the playoff rounds. This is a team that could be capable of some strong finishes if they choose to play more pyramidal tournaments!

The first two consolation brackets included Great Valley C, Henderson B, and A teams from Greater Nanticoke, Moravian Academy, Huntingdon, State College, and Bermudian Springs. I read two games for Greater Nanticoke, and their three players worked quite well together as a unit. None of the other squads crossed my path, but they all picked up some good wins on the day, such as a thrilling 255-250 victory for Huntingdon over Tome School (MD), and it was great to see them all playing and playing well!

Other schools in attendance included Lakeland, Lancaster Mennonite, Cedar Crest, Lampeter-Strasburg, PALCS, Carver E&S, Emmaus, Berwick, Lancaster Catholic, and Downingtown East. Though Lancaster Mennonite came out on the losing end of the two contests I read for them, I was impressed with their steady play, led by Jacob Cairns (3rd individual scorer in prelims). David Campbell also did well for Lakeland as they retool for the future. Every one of these schools earned multiple victories on the day, as well as valuable experience in a highly competitive setting. As we can attest, every tournament is a great learning event to continue building for future matches, and these teams all have something good to build upon!

In the JV division, Henderson C pulled the rare feat of a tournament sweep without need for a final, finishing 9-0 and winning by two. Vivek lead the way in scoring with almost 75 points per game, and was also the lead scorer on power buzzes. This is a team of all freshmen, so Henderson will have lots in the tank for the future. Hempfield’s B team took second place, with a a tournament leading 19 powers as a group. In this way, they somewhat reflected their A team’s tendency for lots of powers. Cedar Crest B took 3rd, displaying excellent discipline with only five negs. 4th went to Waynesboro, a team which debuted at this event last year and returned in strong form. They had lots of impressive buzzes for this level, particularly on literature.

The rest of the JV division was rounded out by B and C teams from Carver HSES, Emmaus, Bermudian Springs, Penn Manor, Berwick, Moravian, and Friends Select. Manheim Township Middle School also joined the action, as did Linden Hall, a circuit debutante.

Both divisions featured some excellent play, and this event was as fun to read as it was to play. We wish all these teams the best of luck in the spring as they gear up for the second half of the season!

This past Saturday, a mix of teams from Pennsylvania and the entire eastern seaboard met for the University of Pennsylvania’s Quaker Fall Open. The upper division played a tough college level tournament as training for a run at nationals, while the lower division played the regular difficulty WHAQ set.

Stats for both divisions can be found here.

EFT was a tough question set since it is, after all, a college tournament and not even a novice college tournament either. While most teams were able to eke out 10 points on most bonuses and most tossups got answered, there was quite a bit of variation in when the buzzes were occurring and powers were particularly scarce (and all the more impressive when they happened).

The division was overall won by “Monticello” from Virginia which came in ranked as the #1 team in the country. They generally backed up their crown, but did have a major hiccup against Dorman (ranked #33 in the country) from South Carolina as well as a small scare against “Rope Meadows” and a bigger scare against Wilmington Charter from Delaware. Ithaca from New York finished as the runner-ups after edging Charter 290-285 in an extremely close match but not finding any answers against Monticello. Charter had a very solid tournament though and even if they end up playing as a duo will be a tough out in any national tournament.

Manheim Township paced the PA teams with a steady, quietly solid performance that saw them win 3 games with a margin of 20 points or less. A particularly gritty comeback against Dorman also saw Township, led by Will’s 39 PPG, come up big when needed. There did seem to be some fatigue setting in later in the day for them, but overall they played well against some of the toughest opponents they’ll face until nationals.

Great Valley, missing a key player or two from their normal A-team lineup, showed good buzzer skills to make up for some holes in their coverage on bonuses (the current PPB may be slightly too low; corrections are coming). This is a young team with a talented lead scorer in Rishi (35 PPG) that has a lot of room to grow. Tenafly from NJ made their PA quizbowl debut with a solid performance. Penn Manor suffered three close losses of 15 points or less though Connor (67 PPG) had in general a strong performance. “Rope Meadows” had a bit more of a frustrating day with an impressive 10 powers offset by 36 negs, though 8 of those did take place in their first match against Monticello. BCA A also came down from NJ for the competition and Downingtown East A, after losing almost their entire A-team from last year, rounded out the bracket.

The WHAQ question set seemed once again slightly more unforgiving than most high school sets on the bonuses, but may have overall been a touch easier than last year’s challenging edition. The top three slots were all taken up by Manheim Township B-D using a strategy of fielding more balanced teams overall that led to some unusual outcomes like MT C having a much higher PPB than MT B and MT D beating MT B. Great Valley B, much of last year’s middle school team, sported the highest PPB of all the Open teams but got beaten to the buzzes a bit more often despite Anish’s 93.75 PPG and finished alone in 4th.

Germantown Friends, a welcome new addition to the circuit this year, started what might be a long-running friendly rivalry with Carver HSES A on a great note with a GFS overtime victory in the prelims and Carver getting revenge in the playoffs by 10 points. Science Leadership Academy also finished with the rest of the Philly crowd at 2-3 behind a 93.75 PPG performance from Jack. Wissahickon A, the only Montgomery County academic team in attendance, rounded out the upper playoffs.

The rest of the field saw longtime circuit regulars Bodine and Franklin Towne Charter as well as B and C teams from Downingtown, Wissahickon, and Carver  plus several other B teams. Overall, it was a spirited performance on a pretty tough set (no team finished with more than 19 PPB) that gave teams lots of competitive matches.