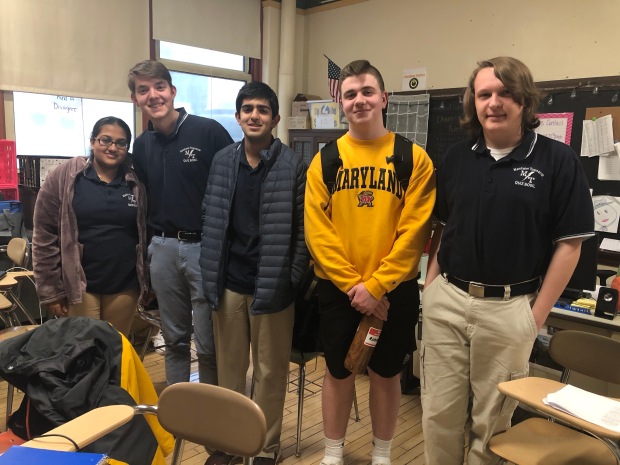 The highest finishing Pennsylvania school was runner-up Manheim Township, ranked #1 in our midseason poll. With AZ and Will’s literature, fine arts, and history knowledge backed by very solid coverage from Sanya and Cyril, this four-person squad gave eventual champion Detroit Catholic Central A (MI) their only loss of the day in the first game of the finals series. They maintained the highest points-per-bonus in the field with 24.23 over the day and cleared 500 points-per-game (PPG) in every non-DCC match.

Penn Manor consisted of Connor soloing, racking up 163 PPG in the prelims. He came back from a sizable deficit in the third place game against DCC C by powering through the last quarter to win 335-305. His strong generalism combined with potential teammate contributions at future tournaments bodes well for nats.

Fifth place went to DCC B, while sixth-place Kiski featured Eddie playing solo. He’s been improving rapidly as a generalist while maintaining solid specialism in history and literature since playing his first pyramidal tournament last fall. Despite going winless in the tough championship bracket, he did manage around 200 PPG against most of his playoff opponents, indicating his impressive ability to challenge top teams.

The house team from Allderdice finished at the top of the consolation bracket with 18.43 PPB and was led by Simon and Truman, while DCC D finished behind them with a 6-4 record. Though we still have yet to see a full-strength Winchester Thurston, the WT team here was led by Andy (67 prelims PPG) for most of the day. Boardman (OH) and Morgantown A (WV) went 2-3 in the afternoon, while the five players from Pittsburgh Central Catholic put up a balanced effort.

Two Morgantown teams finished first and second in the third bracket, while teams from Bishop Canevin, North Catholic, and Yough played close games against each other to round out the field.

Overall, the tournament ran smoothly and most teams were done ten rounds by 3:30 PM. We got to see how southeast PA circuit regulars like Manheim Township and Penn Manor stack up against an established national powerhouse like DCC, while all the teams in the field got at least one win.

We look forward to seeing the Pittsburgh-area teams at Carnegie Quiz in two weeks!